Volleyball can grow in the heart of any individual for life. Proper structure, coaching, and encouragement is the key to watching anyone who has the desire to turn them into a volleyball player for life; but more than that a strong, confident, loving individual. 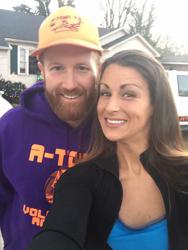 Atown Volleybowl started in 2008 by Jason Freeze and Stewart Hudspeth with the intention of providing a place in Anderson, SC for their group of friends to play and hangout.  Jason named the tournaments A-Town Volleybowl because the group played in a field down in a bowl in Anderson. Little did they know the next few years would make Atown Volleybowl the most fabulous tournament in all the land!

Volleyball brought Jason and Angela together and they married in June of 2010. The couple decided they loved running tournaments together which fueled a dream Angela had since 1999. Their passion for volleyball and people grew into the idea of providing a place to play volleyball, build friendships, and serving those who wanted to come join the fun.

After the 4th annual Volleybowl in May 2010 they decided to have another tournament the next month. Jason and Angela ran 5 outdoor tournaments a summer: May, June, July became the A-Town Blast, and in August the A-Town Nites till the end of 2011. In 2012 the couple decided based on all the requests to hold indoor tournaments while it was too cold to play outside. The couple has loved making all their tournaments themed tournaments.

The original name A-town Volleybowl was changed to A-Town Volleyball in 2012 and then was shortened to A-Town VB for website purposes a year later. AVA (A-Town Volleyball Academy) was formed to add another avenue to teach volleyball to all who would want to learn to play.  In 2015, Atown expanded once again to add travel club teams and most recently a boy’s travel team!

Jason and Angela have held true to their beliefs by training and advancing individuals by building team players.  Atown programs are kept small to give players the attention and proper building blocks they need to move forward with volleyball and life.